Skip to content
I'm participating in 30/30, an exercise under which I have to produce a work of art each day for the whole of April. If I fail to submit something I get kicked out of the exercise.  It's said that more than 1,000 artists are doing it this year.
Each morning I'm given a brief.  Following it is optional, but I enjoy the process of trying to find a way of responding to it.
Here's the briefs and my responses for the second 10 days:

Day 11: When you make or display your work do you consider how people will access it?

If not how might this change how you make and plan your work? 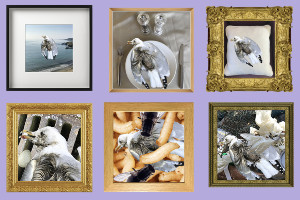 Title: Seagull RIP
There's been a dead seagull on the way down to Looe, quite near where a seagull egg almost hit me on the head a week ago.
Anyhow, I took this as a sign.  I've put the dead seagull in 6 different settings (and picture frames) to try and evoke different feelings - how Looe was its home, its marvelous flying skills, the cycle of birth, death and decay, the food chain, and the duty of care we owe to wild life and the environment. 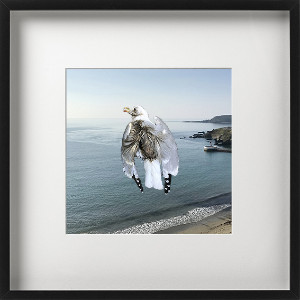 Title: Obituary of a Seagull
https://youtu.be/z4s587YP-s8
I hit on the idea of making a brief slide show of each of the pictures I created yesterday, so they could be seen in more detail and I could add a narrative to them.  I converted the slide show into a movie - see link above.

Day 13:  Collaborate with someone else today 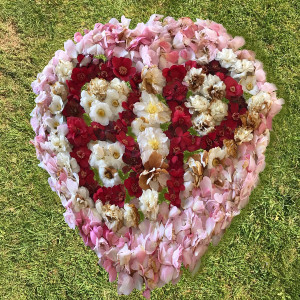 Title: Still Life
I collected a lot of camellia blossom from the garden and made this with my wife, Beryl. It was windy so we made it inside and I "moved" it, rather cack-handedly, onto the lawn using Photoshop. Why?  So the colours would stand out against the green of the grass.

Day 14: Don't make anything today - just send a description of what you would make 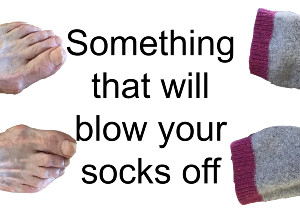 Title: What went missing
I suspected that tomorrow's brief would be "make what you described yesterday", and I thought it was about time I took another crack at an automaton. Gave it a stupid title!

Day 15: Does it take the path of least resistance? 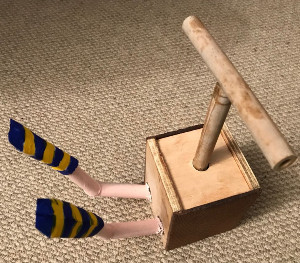 Title: Something to blow your socks off
https://youtu.be/kspKAVvETEU
Suspicion unfounded! I decided to charge ahead with my "Something to blow your socks off" anyhow because I'd been thinking about it overnight and because I'm deliberately creating a path of least resistance in this project - the socks.  See the video, link above, for the result.
I started off with a decent idea - make an exploder (the thing you push down to detonate explosives) that pushes air into something ending in feet with socks on. I ended up making the legs out of bamboo because I needed to keep it simple - not too happy with the result. I couldn't get the feet to swing up and back down during the blow-off.  Also I struggled a bit to blow off both socks at the same time - I was striving to have 2 paths of least resistance!

Day 16: Make a work that takes you 5 minutes 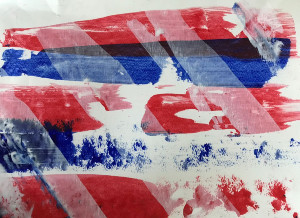 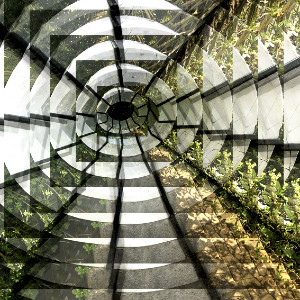 Title: Echo
I was already playing about with Photoshop so I've submitted one of today's outcomes.

Day 18: Make the work that you think your relatives would expect you to make 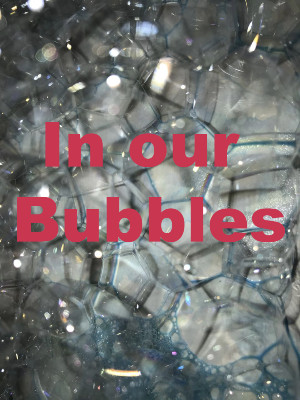 Lockdown: In our Bubbles
https://youtu.be/mfO7owNAlp4ps
People expect the unexpected with my art so I was a bit flummoxed by this brief.  I invited people to suggest ideas and ended up not really following any of them (as expected) apart from a general theme of the current Coronavirus pandemic.   After some agonizing I hit on the idea of bubbles capturing how people felt during the lockdown. I made the bubbles with a little pot of water, washing up liquid and blue ink and then blew into it with a straw until a mass of bubbles fell onto some white paper and I could take this close-up video - link above.

Day 19: Make a work that is edible today 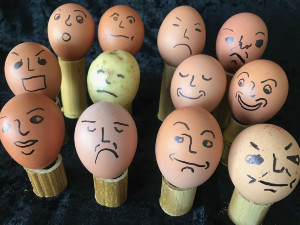 Title: Odd One Out
Echoes of my "Faces" project from a few years ago.  Should have spent more time on the faces!

Day 20: What's your responsibility as a maker 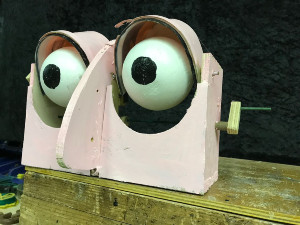 Title: Eye Roll
https://youtu.be/yDwkD83VPLM
Another automaton using whatever I could find in my workshop - mainly some big polystyrene balls, scrap plywood and some split canes.
I wanted to express my (negative) reaction to today's brief" "What's your responsibility as a maker" but it hasn't really worked - see video linked above.

It works in mechanical terms but I don't think it works in terms of what I'm trying to express - the disdain of an eye roll.

I learned a lot from the exercise - both in terms of physical mechanisms (how to translate a round-and-round movement into an opening and shutting one, how to link in other movements ) and artistically (eg how the eye lids and eyes need a lot more work to get right, how there's the shaking of the head as well etc).
Please click on this link to see the final 10 outcomes of the 30/30 exercise.